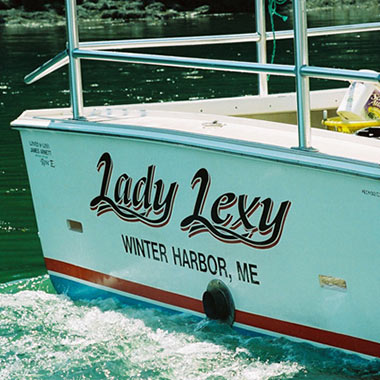 My youngest child, Mike, fished with me when he was much younger. He was eager to learn every aspect of lobstering as he could. When he was ten years old, he insisted on measuring his first lobster. So, he took the lobster in one hand and the measure in the other hand, excitement dancing in his eyes. He calculated the lobster was a short and in his haste to throw the short, he threw the measure over board instead. I can still see his little tow head drop when he realized what he had done. Now, he is grown, married and has a son of his own, whom he will teach to fish. Mike fishes out of the harbor also in his own beauty of a boat.

Winter Harbor has been the lace that I have called home all my life. My hobbies include cheering on the Red Sox and collecting baseballs that have been autographed. I collect duck decoys created and sold locally. I also am a history buff and spend large amounts of time studying and reading about the Civil War period. Classic Rock and the new age Country music are what I enjoy listening to the most.

At the age of fourteen, my farther, Arvid, introduced me to the ways of lobstering. Herman, my grandfather, also shared his vast information on lobstering that can’t be reproduced with the technology used today.

Having fished for well over thirty years, I have owned three boats. My first boat, an old, wooden Blackman boat was fondly named after my mother, Margaret E. My second boat was a thirty-three Young Bros. As other fishermen moved on and up to bigger and better, I chose to proudly fish for twenty-five years from the boat named after my wife. My last boat was created for improved progress with fishing. I stayed with a Young Bros. Model, longer and wider, built for the larger traps. Thus, I named after my granddaughter, Lady Lexy.

In 1974, when I first started fishing is when I joined the Winter Harbor Co-op. It is my belief that as people, struggling to survive in the same difficult field of work, we all need to stick together. I personally have served on the Board of Directors and have played a role as Vice President for twenty-five years and stayed united through the good and bad times.

My oldest child, Angela, was my stern person through some of high school and all of college. She was strong and bull-headed and wouldn’t let the men help her do her job. Through the harbor, she received the nickname “Wonder Woman” because of her strength. On one occasion, she lived up to her nickname doing the same amount of work as the men around her, carrying bait and even showing up the old timers. Angela is married now, with two kids and works with high school students, keeping them in their place.