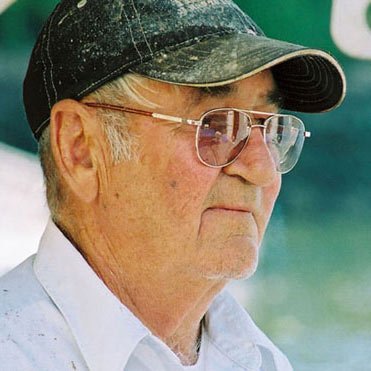 A few years back, I had a couple get married on my boat. My fondest memories are fishing with my father at an early age. I enjoy the quiet of the early morning, the soaring of eagles over my boat, the splash of seals and the jumping porpoise as I go down the sound on a flat calm morning. For me, the challenge of lobstering is knowing the how, when and where to set your traps.

I like country music (the old type where I could understand the words) I liked Johnny Cash. I like the hymn “Let the Lower Lights Be Burning”.

I like to hear “The Wreck of the Hesperus”.

I grew up in Winter Harbor, ME and started lobstering when I was 8 years old. My father, uncle and grandfather were all lobstermen and I learned from them. My great grandfather fished lobster back in the day of sails. He used a sounding lead to get depth. My grandfather was a bay fisherman. He fished to supplement his income and was a full-time postman. He raised 10 children and lobstering was a must for him. My father fished lobster, herring, hauled bait, and worked as a mechanic. He raised 8 children and worked at least 2 jobs for most of his life.

I started fishing in 1947. I fished a few traps from then until 1957 while going to school. My family had to move to the city in 1958 where I graduated high school. I joined the Air Force in 1962, returned in 1966 and resumed fishing. I have been doing it from then until now.

I have two sons who both spent their 4 years in the Coast Guard and are now making their living fishing. I have 5 grandchildren, 2 boys and 3 girls. The youngest will graduate next year. I have one wife I have had for 47 years. She is meaner than a mountain lion and has the patience of Job.

I won my boat’s hull in a drawing at the Winter Harbor Lobster Festival.

I helped start the Co-op as a charter member in 1971. I’ve also served on the Board of Directors quite a few years. Lobster fishing is not just my job, it is my life. It’s a 24-7 commitment. I have fished year round for many years and it’s a job where one never does get caught up. You can work all day and then come home and work some more, painting buoys or measuring rope or a hundred other things that people must do to be fishermen.